When I first started learning modern C++ one of the things I found curious was the widespread usage of pre-increment operators in for loops. For example, in many other curly-brace languages the idiomatic way to write a for loop might look something like:

Whereas in C++, especially in loops using STL iterators, it's more common to use a pre-increment operator, e.g.:

If you search online for this topic you'll find a lot of Stack Overflow posts giving anecdotes claiming that the pre-increment form is faster. When I looked into this further I found some that linked to Gavin Baker's 2008 blog post STL Iterators and Performance, which explains why pre-incrementing STL iterators is faster, including some benchmarks demonstrating that using a pre-increment operator is up to 2x faster than post-incrementing. I will summarize the reasoning here, but Gavin's blog post is well written and covers some of the details more thoroughly, so I encourage you to take a look at his post if you want more details.

The Argument For Pre-Incrementing STL Iterators

The pre-increment and post-increment operators have different function signatures:

In practice, if we're writing a custom iterator type named Iter that might look something like this:

Is This Argument Still Relevant?

I was somewhat skeptical that the above argument is actually still valid nowadays, especially with modern compilers. I wanted to see if I could reproduce the overhead demonstrated by Gavin, especially since his original post is 13 years old now and a lot has changed in the C++ world since that post was originally written. I was skeptical primarily for two reasons:

The original blog post includes a broken Github link so I wasn't able to just run the same code the original author used. However, I wrote my own micro-benchmarks using Google's benchmark library. The micro-benchmarks populate some different STL and Abseil containers and measure how long it takes to iterate over all the elements in the container. I disabled CPU frequency scaling for all these benchmarks using sudo cpupower frequency-set --governor performance, which is the mode that benchmark recommends running in.

The full source code can be found here and built using this Bazel BUILD file. If you don't have a way to easily build Bazel C++ code you should be able to remove the Abseil stuff from iterperf.cc and just link against the benchmark library using these installation instructions. I compiled this code using Clang/libcxx 11.0.1 at optimization level -O3 with LTO enabled. The basic idea in the code is I populate a vector or map data structure of unsigned integers using std::iota and then sum them. The actual code I wrote is somewhat macro heavy, but this is what something like the pre-increment std::vector benchmark looks like after macro expansion:

The basic idea is to traverse the entire data structure and sum the values in it, using either the pre-increment ++it or the post-increment it++ syntax in the for loop. The benchmark::DoNotOptimize() call ensures that Clang doesn't optimize away the loop entirely. Also note that there isn't any risk of undefined behavior (e.g. if the sum overflowed) because all of the numeric types in the program are unsigned. The benchmarks measure only the time to iterate the containers (and sum their contents), time taken to construct the containers is not counted.

To make these graphs interesting I made sure to put enough data into the containers so that the data doesn't fit entirely in the CPU caches. The containers in this benchmark contain 10 million unsigned 32-bit numbers (or pairs or numbers for the associate containers). My computer has cache sizes of 32 KiB L1 Data, 256 KiB L2, and 8192 KiB L3, so the data set exceeds the L3 cache size by a fair amount, even for std::vector.

To keep the labels readable I've split the benchmark results into two graphs. std::vector, std::forward_list, and std::list. As I anticipated, and contrary to the measurements from Gavin's blog post, there is no significant difference between pre-increment and post-increment times for these containers: 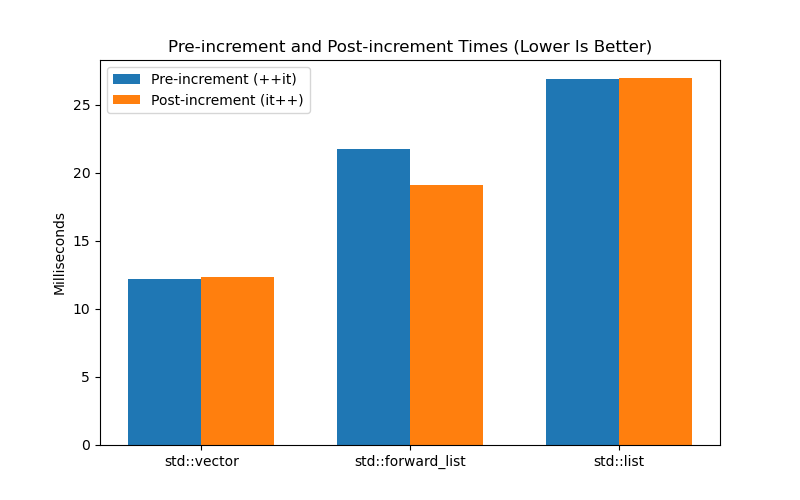 The second graph shows times for the associative containers std::map, std::unordered_map, absl::node_hash_map, and absl::flat_hash_map. This one is similar in that there is no significant difference in run times for pre-increment and post-increment: 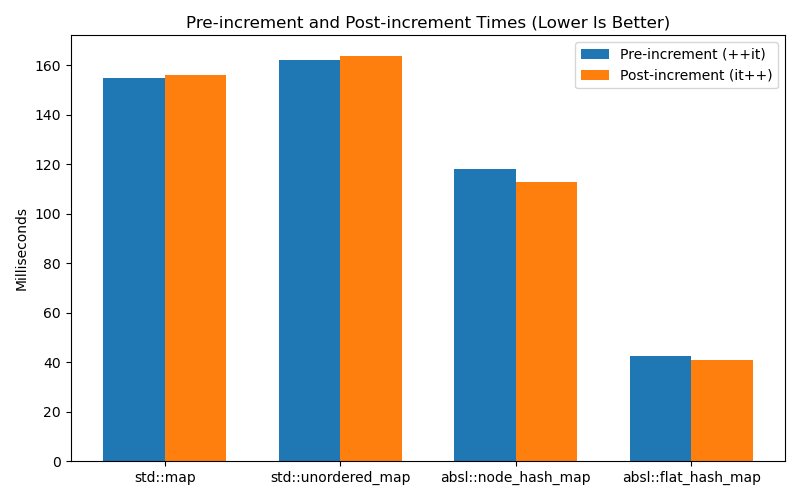 I ran this benchmark suite a few times and the exact times I get vary a bit from run to run, but there is never any consistent difference in one version of iterator access being faster than the other for any container types. I think the way these graphs show the effects of cache locality is very interesting, and the numbers for the Abseil map types really shows how much of an improvement you can get over std::unordered_map.

Compilers have advanced since 2008, and if you're using a modern compiler and compiling your code at a high optimization level, you probably won't observe any performance speedup by using pre-increment operations on iterator types, especially not for STL containers. Well written libraries should be including the iterator definitions in header files, so compiling at -O2 or -O3 should be sufficient to get good inlining (i.e. in most cases you shouldn't need to have LTO enabled). It's possible to imagine some really pathological examples where the inlining feature of the compiler would handle the two operators differently, but that seems kind of far fetched in practice.

If you're working in a codebase that already uses the pre-increment ++it syntax you should probably keep using that for consistency reasons. I've also seen codebases where the pre-increment syntax is used for iterator types, and the post-increment syntax is used for scalar types (e.g. int or size_t), and again if that's the case you should probably maintain the convention for consistency. But in general I wouldn't expect the choice of pre-increment or post-increment to have an impact either way on how your program performs.

The above analysis is for optimized code only: in unoptimized code anything is possible, and I could imagine a case where pre-increment operators would be faster than post-increment operators when compiling at low optimization levels. But even in this case, the vast majority of loops in real-world programs are dominated by time spent in the loop body, not in the looping control structure itself. So in general my advice would be to not worry about this issue.